There’s history in two of Nancy Jardine’s contemporary Ocelot Press mysteries! Though, what of the third? She tells us more about the inspiration behind each of them. All three are now available under the Ocelot Press imprint.

I’ve been working like a beaver recently to re-publish my three contemporary mysteries with Ocelot Press. Two out of three of them have historical ancestral aspects which drive the plots, though how did that come about?

Back in 2011, as a fledgling author, I was investigating my own ancestral family background, an engrossing study which threw up some interesting surprises. I euphemistically say “interesting”, though hilarious is probably more accurate regarding my own reaction to finding out about the proverbial ‘black sheep’ in my family, just a matter of three generations ago. My second-cousin’s reaction was more akin to horror, with a wish to bury the evidence again for posterity!

I was also watching the current BBC serialised Charles Dickens novel at that time, so it was very simple to ‘borrow’ the Dickensian theme of an old house as a quirky bequest and give it a contemporary twist. Monogamy Twist is the result – a romantic comedy mystery set in Yorkshire with some additional worldwide locations. The answer to the mystery is lodged deep in the history of Greywood Hall and its former occupants! 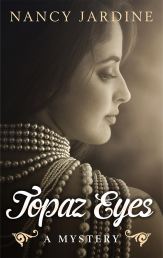 I enjoyed creating my fictitious family tree so much for Monogamy Twist I set myself a task to create a much deeper mystery set in European and US locations. Multiple generations in the invented family tree gave me a fabulous cast of contemporary characters to work with, and I was able to site my descendants in wonderful cities I’ve had the pleasure of visiting. The contemporary third-generation cousins in Topaz Eyes aren’t all loving and kind, some are even downright deadly! Topaz Eyes developed into a mystery thriller with various criminal elements, though in many ways it’s also a romantic suspense mystery.

My third Ocelot Press mystery is Take Me Now. This is what I call my ‘Corporate Sabotage Mystery’, a romantic comedy that’s mainly based in a fictitious island castle near Oban on the west coast of Scotland. Though it’s true that history isn’t a factor in this fun romp, some amazing world-wide locations do feature as my spirited general-factotum heroine, Aela Cameron, whisks my slightly-dented hero, Nairn Malcolm, hither and thither. Ferrying Nairn around in his many forms of transport, including his neat little floatplane, Aela ensures his adventure sports businesses keep operating whilst ferreting out the saboteur who is targeting both Nairn’s companies, and the two of them, in malicious attempts to destroy and even kill.

I’m delighted to announce that my three Ocelot mysteries are now available from Amazon in e-book format and Paperback versions are due mid-January.