The Ocelot Press Book of the Month is The Calgary Chessman by Yvonne Marjot.

As part of the mini-celebratory blog tour, Yvonne is interviewed on Nancy Jardine’s blog today. Pop in and find out a bit about Yvonne and where the inspiration came from for the excellent Contemporary Mystery read The Calgary Chessman. She also has some great tips for writers…and readers.

This post is by Ocelot Press author Nancy Jardine

Hello from a presently very snowy part of Scotland!

Well, actually right now most of Scotland is under some degree of snow cover as the ‘Beast from The East Mark 2’ is blasting a large chunk of the United Kingdom with intermittent levels of snow-pelt.

It’s not unusual in my part of Aberdeenshire to get snow at this point close to mid-February, but  a snowy day does mean it’s a fine time to ‘coorie doon’ under a warm blanket or snuggle beside a roaring fire –  if you still have one – and read something entertaining and enjoyable.

Also, being the 10th of February 2021 as I write this, it’s getting closer to Valentine’s Day. It’s a time to pamper yourself, or someone you love, either by gifting them an eBook or buying one for yourself. It’s probably too late to get a paperback version posted, Covid 19 pandemic not helping with slow postal services, so gifting an eBook is possible.

To celebrate Valentine’s Day I am offering two of my Romantic Comedies #FREE during the next few days in eBook format across the Amazon network.

If you’ve not read these ‘bit of fun’ reads yet,  then why not have go! 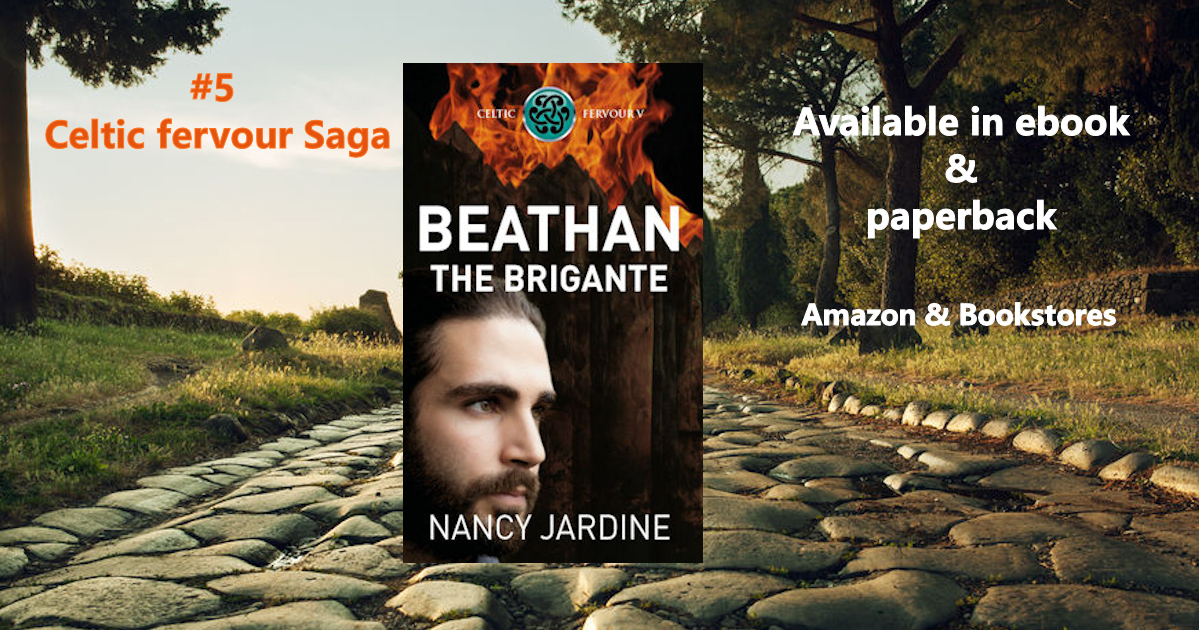 Ocelot Press is delighted to announce that the eBook of Beathan The Brigante, the latest addition to Nancy Jardine’s highly-interlinked Celtic Fervour Series, is *FREE* on the 15th October 2020 across the Amazon network!

(Psst! And if you’re quick, you should find that some of the other books in the series have a reduced price during this special promotion.)

Book 5, Beathan The Brigante, features young Beathan of Garrigill, but it also depicts the interlinking of his life and that of the Ancient Roman General –  Gnaeus Iulius Agricola who is a main character in Books 4 & 5.

Having been captured by the Ancient Roman legions, after the battle at Beinn na Ciche in north-east Caledonia, we pick up Beathan’s story in AD 85 at Trimontium Roman Fort where he is used as a menial fort slave. General Agricola, having been summoned back to Rome by Emperor Domitian, collects Beathan and some other high-ranking hostages at Trimontium Fort and drags them all off in chains.

During the long trek to Rome, Beathan learns surprising things about General Agricola. In turn, Agricola finds aspects to grudgingly admire in young warrior Beathan. Escape from, and revenge against, his captors doesn’t come quickly for Beathan. However, by AD 89 he is back in Brigantia – the land of his birth – where revenge blazes for him at Vindolanda Roman Fort. It’s gratifying that by then he is closer to a reunion with his much-missed Garrigill kin ,and it’s even better that romance with a young Brigante warrior-woman named Torrin has lightened his eventful life, even though he is still only seventeen.

Moving from place to place is a regular feature for the Garrigill Brigantes in the Celtic Fervour Series novels, especially as they become refugees fleeing from Brigantia to Caledonia, but young warrior Beathan can truly say that he is the most widely-travelled across the Roman Empire!

It’s a reasonable assumption that youths matured into men much faster in 1st Century AD, especially if they were subjected to the treatment that’s meted out to Beathan of Garrigill!

Link for Beathan The Brigante

You can find out more about the Celtic Fervour Series HERE

Wishing you a happy time reading this week!

Yesterday, 20th August 2020, was the official e-book launch of Beathan The Brigante – #5 of Nancy Jardine’s Celtic Fervour Saga series. It’s now available from Amazon in e-book and paperback formats for readers to enjoy! Paperback versions are also available for ordering in bookstores.

The continuous saga is set in late 1st Century AD Roman Britain AD 71-89, and follows the adventures of warriors who originate in the Hillfort of Garrigill, Brigantia. (present day Cumbria/North Yorkshire/Northumberland) Across the five books of the series, the reader will find that each book features different warriors of the clan, and as the series progresses some Ancient Romans also become main characters.

The threat of Ancient Roman domination is a major feature of the stories and is highly instrumental in influencing what the Garrigill warriors do to thwart Roman invasion. When complete destruction of their Celtic lifestyle is inevitable, the Garrigill clan become refugees and flee northwards to Caledonia. They have not in any way given up, it’s more that they are finding other ways to defend themselves against the Roman invaders. As the books progress, so do the years of Roman occupation during what is historically termed the Flavian era. This equates roughly to AD 69 – 96.

The genuine historical figure – Gnaeus Iulius Agricola – held various important positions in Britannia. According to the historical record, Agricola was Legate (Commanding Officer) of the Legio XX (Twentieth Legion) c. 69-73. Then, from approximately AD 77-84, Agricola was Governor of the Province of Britannia and was Commander of the Britannic Legions. Some of the concepts of the novels are formed from a study of the writing of the Ancient Roman writer Cornelius Tacitus (the son-in-law of Agricola). Tacitus’ work on the ‘Life of Agricola’ is the main historical source for information on Roman Britain.

In Books 4 and 5, second generation Garrigill warriors are the main Celtic characters, though their parents still there in the background. Book 5 is mainly Beathan’s story, with the first half of the novel depicting the interlinking of the lives of Beathan and General Agricola.

All of the novels can be accessed using this LINK to Nancy Jardine’s Amazon Author Page. If you’d rather just read more of what Beathan The Brigante is about use this link HERE.

There are now only five days till the launch of Beathan The Brigante, the fifth novel in Nancy Jardine’s Celtic Fervour Saga Series – the official e-book launch day being on the 20th August 2020!

To celebrate the newest book in the series, Nancy has a super offer for new and existing readers. The first four e-books of the series are now on offer from Amazon at 99p/99c/ 0.99 euros for a few days prior to the launch day for Beathan The Brigante (#5).

(Note: All are full length historical novels of around 80+ thousand words.)

If you have read Books 1-4 already, then there is always the wonderful possibility of being able to gift the ebooks to someone else!

Also please note: Beathan The Brigante is currently on Pre-order at £1.99, but this price will rise again from launch day (Usual price for the Celtic Fervour Saga is £3.99)

The links below should make it easy for you to access the books on Amazon.